“I know a place where we could have lunch,” said my friend J last Saturday.

We’d had a meeting in Theseion, a colorful district near the Acropolis, and decided to wander back to the train via the Central Market. Neither of us has the chance to do that often, so we enjoyed every step of the way. We passed a church I’d never seen before, perched on a rock; 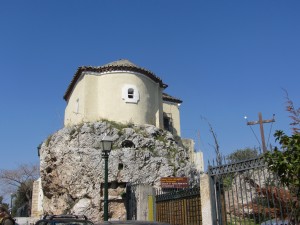 neoclassical houses in every state of repair from freshly painted to crumbling; a thick stream of peddlers selling everything from original handicrafts to complete junk; half-excavated antiquities; outdoor cafes and restaurants;

Plateia Avyssinias and its flea market; and the miscellany of shops on Athinas Street, where I stopped by a favorite Cretan bakery to buy gritsinia studded with 8 seeds and J “threw an eye” into the tack and saddle emporium next door.

A bit of the Flea Maarket

By the time we reached the Market, we had no appetite for dangling meat carcasses or even mountains of glistening fish on ice. But we were hungry.

So J led me down the street with the vegetable booths, around the corner and across the street. She stopped outside two scruffy brown doors, thick with layers of chocolate paint, and said, “This is it.”

I peered into the darkness. In this neighborhood, there are dozens of basements, but most of them are shops stocked with dry goods, sacks of beans and grains, textiles, ropes. . . I didn’t expect the black hole to conceal a restaurant. And yet, as I negotiated the uneven steps, I could see massive wine barrels lining one wall and about ten tables, all occupied.

I followed J to the “kitchen” next to a second set of cement steps, which let in a little light. It was about the size of a galley on a small sailing yacht, separated from the main room only by a till enclosed by a wooden grate. Pots and baking pans filled a counter near the wall. I saw no other kitchen, and no place to prepare the food, but perhaps there is one hidden off limits.

A grouchy looking older man stood by the till and supervised the youngish waiter. He nodded at us to sit at the adjacent table for five, which had two empty seats. Then we realized that two of them were old friends.

It seems Diporto (Theatrou Sq. & Sokratous 9) is an institution. Everyone knows about it but me, and I’ve been here 40 years. How did it escape my notice!

It has obviously escaped the attention of the Board of Health and Brussels hygiene rules, but no matter, we ate extremely well. A big bowl of fava for J and a big bowl of spicy cuttlefish stew for me, though I was tempted by the chickpea soup, which seemed to be the most popular order. The remains of fried fish, salad and something with tomato sauce decorated the plates of our friends, who called for another half kilo of retsina and some fruit.

The waiter obliged, squashing the plate with sliced apples onto the one with the fish bones. Yuck. Our Swiss friend V took the situation in hand and cleared the table herself. And we went back to discussing pension prospects, architecture and synchronicity. When they left, three men, strangers this time, joined us. Our bill was minimal.

History repeated itself on Thursday night. I’d gone to hear the Athens Singers, my old choir, sing John Stainer’s The Crucifixion in St. Paul’s Church near Syntagma. The performance was excellent and there were lots of old friends to catch up with before and after. Including J, who said, “I know a place where we could have dinner.”

She invited another couple and off we went into Plaka, where there was no sign of any crisis, just flocks of young people having a good time. And half way down marble-paved Kythathinaion Street, she steered us into another basement institution, where three laughing women of a certain age were hauling themselves up the uneven steps.

It’s bigger than Diporto, with two rooms and a kitchen tucked behind a big display case fogged by the steam from simmering pots and pans. And it’s brighter and swankier, with B&W photos and yellowed certificates on the wall, but the same old-fashioned rush-seated wooden taverna chairs and tables.

We didn’t speak much. A guitar- and bouzouki-playing duo were seated next to us. They were singing old favorites, classics that Bithikotsi made famous in the 60s and earlier. But the four of us lapped up the nostalgia, along with the retsina, which is becoming extinct, while dining sumptuously on zucchini croquettes, horta (greens), cod brandade in spicy tomato sauce, fabulous fried potatoes and, of course, fava, J being addicted to it.

As she said, “Basics in the basement, what more could one want?”

And for a couple of hours, we reveled in the illusion that Athens has not changed and all was well in the capital of Crisisland.

In Greece, fava are split yellow peas, usually served pureed and at room temperature. They are quite different from Italian fava (broad beans). The Diporto fava arrived with a topping of chopped onions, olive oil, black olives and pickled peppers. The Bakaliarakia version was even better. It was made with peas from Santorini, which were noticeably creamier and tastier. The dish is a taverna staple year round, but particularly during Lent.

Here’s how I make it.

Wash the peas well and place them in a pot with the onion and oil, cover with cold water and bring to the boil. Skim off the scum and simmer for about an hour. The time will depend on the quality of the peas. Test them for tenderness and add more water if necessary to keep them from sticking. They should be quite soft, the consistency of loose mashed potatoes.

You can eat them as is, without zapping them in the food processor, but I prefer the smoother texture. Like split green peas, they will solidify when they cool.

Fava is usually served in tavernas at room temperature with onions, plenty of extra oil, fresh lemon juice. But I like to add capers and sliced sun-dried tomatoes. The other day, though, I made it looser as soup, topped with concentrated balsamic vinegar, hot pepper flakes and some finely sliced fried sausage. Delish. 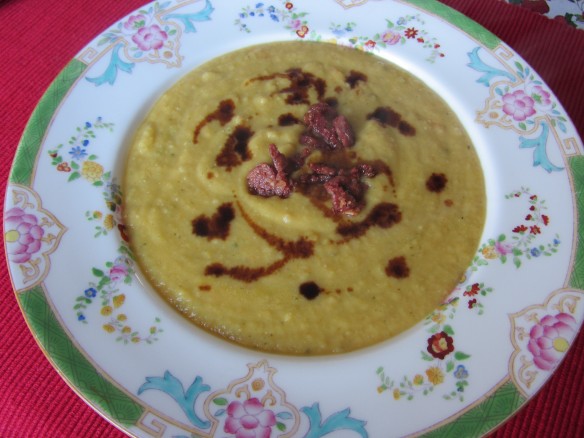 9 thoughts on “Back to Basics in Athens Basements”